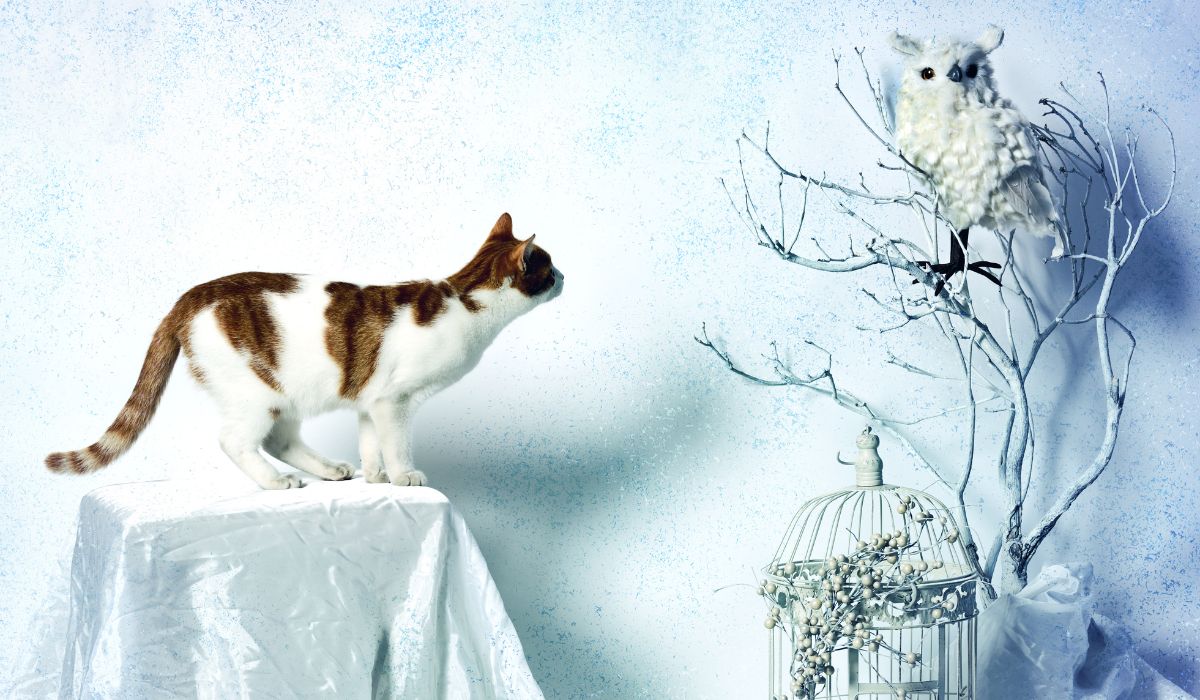 They’re cute, they hoot, and they’re rarely seen as predators, but can owls eat cats?

Owls thrive on meat, and they adjust their diet to whatever food is available in their environment. Their size also plays a big role in what they eat.

In this article, I share everything you need to know about owls lunging down on cats.

Owls aren’t that big, but some cats are. You might think that this is reason enough for these birds to stay away from your kitty, but the truth is that they often attack and kill prey much larger than them.

It’s unlikely that your cat will be on an owl’s menu, but if there’s a shortage of prey and they spot your feline friend, there’s a big chance that they’ll go in for the kill.

Reasons Why An Owl Would Kill A Cat

Owls don’t attack cats out of boredom. If your kitty is caught in their claws, the reason for it will be more logical.

There are two reasons why owls attack cats:

Prey Shortage: When an owl is hunting for dinner, especially when food has been scarce and your feline looks like an ideal meal, it might sweep in for the kill.

Stealing Prey: If your kitty caught a bird or rodent and an owl wants to snatch it from them, it’ll attack your pet while attempting to steal whatever they have in its mouth.

Typically, these are the only reasons why an owl will attack your cat.

How Do Owls Attack Cats?

Much like cats, owls stalk and attack. They’ll wait for prey to appear and watch it from a distance.

When ready to attack, some owls will swoop down with their wings open, while others drop down and only open their wings right before they grab their prey.

Owls typically hunt at night, away from where they rest during the day. Even if you spot no owls near your yard during sunlight, your cats can still be in danger while exploring in the dark. This is also when cats like to hunt insects and mice – something an owl could be planning to do at the same time.

If both animals have their eye on the same prey, owls can attack your cat to get the kill for themselves.

An owl will lunge when attacking your cat, aiming for the neck and spine area. It’ll fatally pierce its claws into your kitty’s skin to puncture blood vessels and organs. If the owl plans on eating your feline, it’ll do it on the ground.

Can Cats Fight An Owl?

Some owls are capable of killing and carrying a big cat, but can cats fight an owl?

If an owl attacks at night, its body will be even stronger in hunting, and the chances are slim that your kitty will survive or escape.

During a daytime attack, your cat might have better odds. Depending on how the owl chooses to attack your cat, it may see it coming and turn into fighting mode. If your cat is strong and big enough, they’ll likely put the owl in its place. Cats also have a better chance of beating an owl if the owl is still inexperienced. 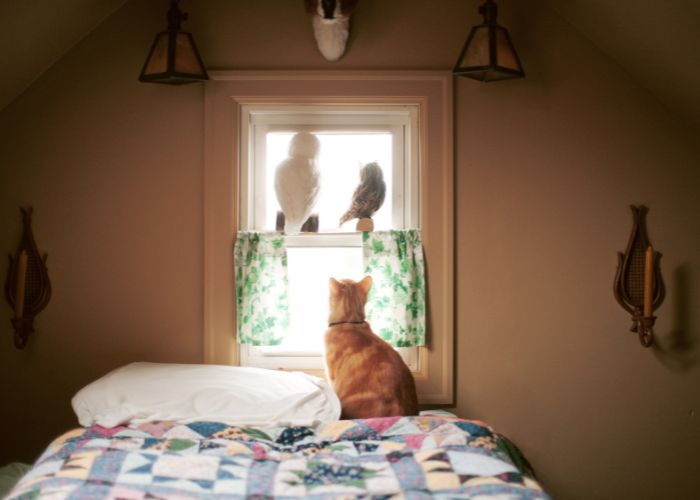 Cats aren’t on an owl’s daily meal plan. There are about 250 different owl species, and none of them will seek your kitty out. While the diet of an owl depends on their type, here’s what they generally eat:

How To Keep Your Cat Safe From Owls?

There are a few ways to keep your cat safe from an owl attack. Here’s what you can do:

Watch Out: Keep a lookout for owls in your area. If you hear any during the day, you should be extra vigilant and avoid keeping your cat outside on its own.

Stay Inside: You should keep your cats indoors at night to minimize their chance of encountering an owl.

Fence Off: If possible, you should fence off a porch area where your cat can freely explore. This way, an owl won’t get in if your kitty is out at night.

Keep Away: Owls don’t like bright lights and noise. Surrounding your house with lights and installing motion detectors with an alarm or beam will help scare owls away.

What To Do If An Owl Attacks Your Cat?

Although an owl attack on your cat is a horrible thing to see, you should never cause the bird any harm.

Instead, try chasing the owl away by making loud noises like clapping your hands or screaming.

If your cat has already been hurt, immediately take them to the vet! Even the slightest scratch can lead to an infection.

Learn more about Is Peanut Butter Bad For Cats?

To Sum it Up

Typically, owls don’t eat cats, but your feline predator might become the prey if there’s a food shortage. Not all owl species have the power to hurt or kill a household cat, but those who do will do so if they need to.

To protect your kitty from an owl attack, keep them indoors at night. You can also surround your yard with bright lights to scare any owls away. If your cat is ever a victim of an owl attack, you should immediately take them to the vet.

I hope this article answered all your questions about owls attacking cats. If there are any more, ask them in the comments for other community members and me to answer!

How do owls attack cats?

Owls attack silently. They strike prey in their neck and spine with a paralyzing hold. Your cat will never see it coming.

How do I protect my cat from owls?

The best way to protect your cat from owls is to bring them inside whenever you spot one. You can then try to scare the bird off.

If you fear that an owl will attack your cat at night, you can create an enclosed area for your pet.

Can a cat beat an owl?

It's unlikely that a cat will beat an experienced owl.