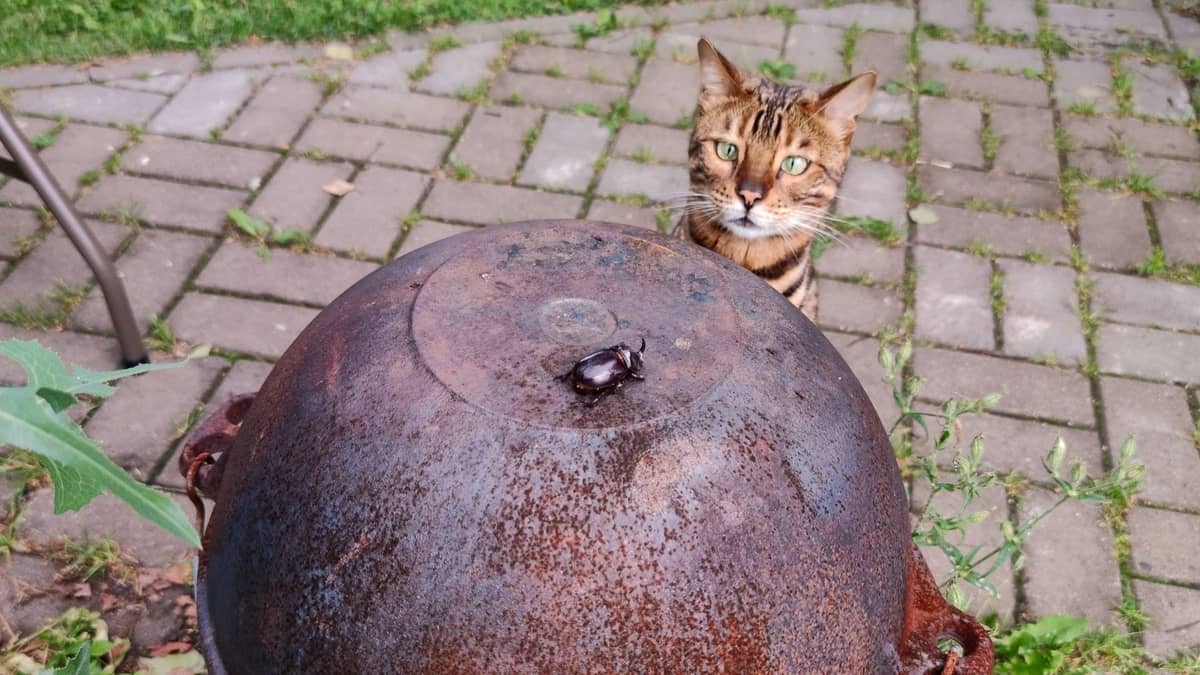 When I saw my cat eating a bug for the first time, I panicked a bit. I immediately inspected the situation and caught myself asking: Can cats eat beetles?

Inside my cat’s mouth was a shiny, dark, hard-shelled creature. It seemed as though my kitty was enjoying the insect, so I figured it was harmless. My cat didn’t seem sick afterward, but the event still made me curious to know if some beetles can be poisonous to cats.

Cats like hunting and even eating bugs. If you live in an area with different bugs, you should educate yourself on which poses a risk to your cat’s health.

In this article, I share what I’ve found out about different beetles’ risks for cats.

Why Do Cats Eat Bugs?

Even if you feed your cat top pedigree food, they’re still likely to hunt and eat bugs. Cat’s have a natural-born predatory instinct. Chasing, killing, and eating their prey brings them joy.

Many common insects are harmless to your cat, but some can make them sick. Even when they eat a non-poisonous bug, they can still experience gastrointestinal issues.

If you catch your cat eating a bug, you can keep calm. As long as they don’t show any unusual symptoms, they’ll be okay. 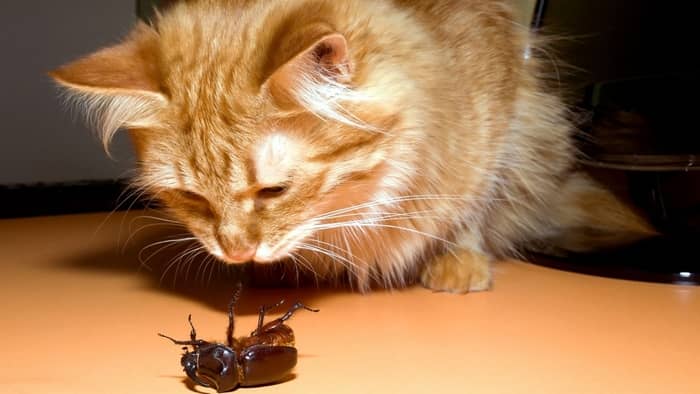 Cat’s don’t typically hunt beetles. They prefer soft-bodied insects like ants, flies, and moths. Beetles have a tough exoskeleton that your cat may find hard to swallow. Your cat may occasionally hunt hard-bodied bugs like beetles for a few reasons:

If your cat spots a beetle, there’s a big chance that they’ll hunt it. Cat’s have a curious nature, and when they see something crawling or flying, they’re likely to chase after it.

Beetles often crawl in low grass and fly to reach far spots faster. If your cat spots this critter, they’ll definitely be interested in it.

Cat’s have a natural instinct to hunt, and even home-bound fuzzballs need to satisfy this urge every once in a while. While some cats will hunt to supplement their diet, most just do it for fun.

If your cat spots a beetle and they’re in the mood for hunting, they’ll prepare to stalk and attack. Beetles can crawl and fly, so your cat may enjoy the challenge of hunting this insect.

Beetles aren’t a preferred choice for most cats, so if you see yours running after one, they may just not know any better.

Cats learn which bugs are safe and satisfying by attempting to eat them. If your cat has never encountered a beetle before, they may hunt it for this reason.

Besides an instinct to hunt, your cat has an innate desire to protect you. When your cat thinks a beetle poses any threat to their family, they will pursue and kill it.

It’s common for cats to kill and gift large insects and other animals to you. They use this act to demonstrate their love and protection.

Even when your cat doesn’t hunt to protect you, they offer excellent pest control services. Cats may also kill insects in their territory to defend themselves.

Beetles are non-toxic to cats. They have a hard shell that most cats won’t swallow and pose no risk to your cat’s health if they only bite it.

If your cat has never hunted a beetle before, they may attempt to eat it. When you’ve seen your cat eating a beetle, there are a few symptoms to look out for.

While beetles aren’t poisonous, their exoskeleton can cause your cat a lot of discomforts and even pain. Symptoms of discomfort include:

These symptoms usually only last a few days. If they don’t, you need to take your cat to the vet.

It’s uncommon for beetles to bite cats as a defensive mechanism. When your cat hunts one, it might try to run or fly away.

If this first line of defense doesn’t work, the beetle will produce a toxic chemical. The boiling chemical spray will expel from its abdomen toward your cat with an explosive sound.

Luckily, it won’t harm your cat too much, but it will irritate. If your cat shows any unusual signs after being sprayed by a beetle, you should take them to the vet.

This defense mechanism kills some beetles while others continue to live in pain. It’s unlikely that your cat will try to pursue the beetle again after this attack. 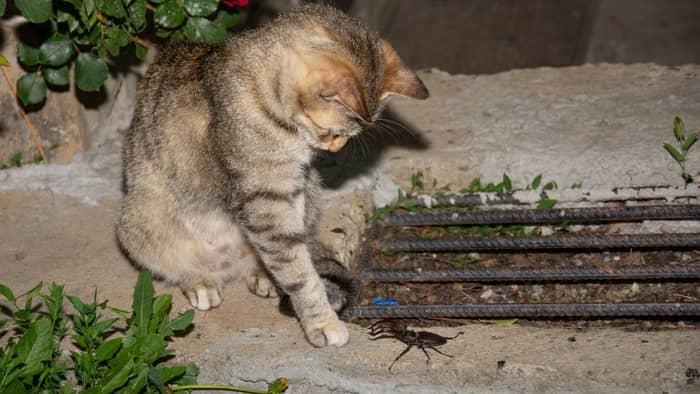 Cats can eat beetles, but it won’t be a pleasant experience for them. After your cat’s first attempt, they will likely never do it again. When they spot another beetle, they might just play with it.

If you spot your cat playing with a beetle, you don’t need to panic or distract them. Cats learn by hunting different insects, and beetles are safe critters to play with.

After your cat attempts to eat it, just keep an eye on them to spot any discomfort and unusual behavior.

I hope this article’s information helps you! If you have any questions that weren’t answered here, pop them in the comments. I, or other community members, will answer them for you!

Read more about Is Eating Grass Good For Cats?

Are HuHu beetles poisonous to cats?

If your cat eats a HuHu beetle, you should take them to the vet. They produce a toxin that can make cats sick and possibly cause death. Typically, beetles aren't toxic to cats, but the HuHu beetle is one to keep away from your cat.

Are Boxelder bugs harmful to cats?

Cats can be sensitive to the chemicals in Boxelder bugs, but if your cat eats one, it won't be fatal. These bugs have a foul taste, so your cat will likely stop after the first few bites.

Is it okay to let my cat eat bugs?

The exoskeleton of some bugs may have an irritant effect on your cat's gastrointestinal tract, but generally, it's harmless for them to eat bugs.